“The Ladder” The Monk John speaks thus about tears of repentance:
“Just as fire burns and destroys firewood, so thus do pure tears wash away all impurity, both outer and inner”.

On the fourth Sunday of Great Lent (April 10, 2016) with the blessings of His Eminence Metropolitan HILARION, Archbishop of Eastern America and New York, First Hierarch of the Russian Orthodox Church Outside of Russia, the parishioners of Saint Sergius of Radonezh Orthodox Church Sargodha Pakistan participated in the Divine Liturgy and venerated the Precious and Life-Giving Cross of our Lord and Savior Jesus Christ.

A special day for the Orthodox Christians as they with great reverence and true spirit of holy orthodoxy commemorated the Monk John of the Ladder as he is honoured by the Holy Church as a great ascetic saint of the Eastern Orthodox Church. On the fourth Sunday of Great Lent, Fr. Joseph Farooq preached about the ascetic life and spiritual works of Holy Father John Climacus (of the Ladder). Fr. Joseph  told the faithful that Holy Father John Climacus is the perfect example of fasting, prayers, repentance and obedience because traditions say that Saint John Climacus entered in the monastery at Mount Sinai as a sixteen-year-old boy and remained there, first as a novice, then as a hermit and finally as abbot of Sinai, until he died at the age of eighty, in about 649. He spent entire life in deeds of silence, fasting, prayer and tears of penitence.

Further Fr. Joseph told the faithful that Holy Father John Climacus is the author of spiritual work named “THE LADDER DIVINE ASCENT” and this spiritual document St John speaks about tears of repentance: “Just as fire burns and destroys the wood, so pure tears wash away every impurity, both external and internal.” His holy prayer was strong and efficacious, as may be seen from an example from the life of the God-pleasing saint. THE LADDER begins with renunciation of the world, and ends with God, Who is love (1 John 4:8). 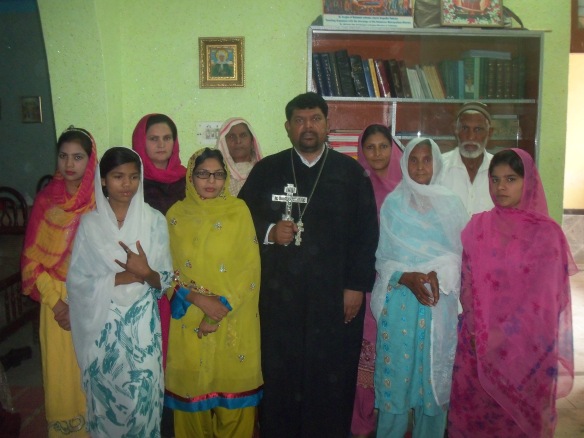 With the blessings of His Eminence Metropolitan Hilarion, the ROCOR Mission in Pakistan is sharing the universal message of love, peace and the sacredness of Holy Traditions of Orthodox Faith to the people of Pakistan!

Donate to the Mission